2 weekends ago Mel and I took on an a small adventure through Bangkok just to see a few sites. We had heard of going to the Flower Market or Bok Thong Dalat so we planned on going there plus a few other places.

Because we were going to take the Chao Phraya River boat we decided to head to the Marriot in the morning to have coffee and breakfast. Then we took the Marriot’s shuttle boat to Saphan Taksin boat hub.

Upon arrival we were approached by some Thai guy that spoke English too well. Sign number one that he was trying to scam us or something shady. So we politely told him we were going to the flower market. “Flower Market closes at 9am.” It was of course 8:55am and I knew that the market was a 24 hour market so on we went on the boat.

The market was pretty interesting. Lots of flowers. Mostly the same types, but one of the streets had lots of bouquets.

Some attempt at good photography

From the market we headed north to Wat Suthat, which is somehow important because the arch thingy. I’m not very good with knowing information on that stuff. I just went because somebody suggested we go and it was very pretty. 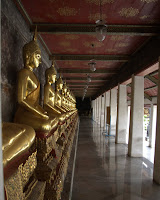 The rest of the day really didn’t amount to much. We had wanted to check out Khao San Road so we went to have lunch there. Not impressed at all. The Thai’s there all speak English way to good which is the key to tell them to stay away from you as they are trying to scam you or pick your pocket. I found out later from some friends that the roads around there are actually very nice and we went for dinner at one of them and they are indeed very cool, FYI.

After lunch and a downpour we walked to Vimanmek Palace. We were excited because I think we both thought it might be a cool place that not too many tourists go to. That was abruptly swatted away when we arrived and had to take a tour because there were so many people..

Overall I think our trip was quite fun. A lot of walking, but it was good to get out and about.