Last week Mel had to travel up to Kamphaeng Pet to do some training for where she worked. I was stuck alone in Bangkok Monday, Tuesday and Thursday all alone. On Thursday after I finished teaching my class I started an adventure to travel up there as well. Mel’s transportation up there had been prearranged through her work so we didn’t have any info other than I needed to take a bus to get up there.

I figured out where the bus terminal was only to be immediately overwhelmed with options of different busses. The bus terminal I was at was the Mo Chit Northern Bus Terminal which apparently services a lot of different companies and routes up to northern Thailand. I wondered around trying to read signs until I finally just walked up to a booth and repeated Kamphaeng Pet until I thought I had a ticket going there sometime soon. I looked over the ticket and figured out what bus number it was and then wondered around until I found a bus that had the same number and hopped on. It was a fairly comfortable bus and I just hoped it was the correct one and going where I wanted it to go. Turns out it was. The trip there wasn’t terrible except the sun was beating through the window and the curtains on the bus were very thing so it was very hot. The bus had A/C, but it wasn’t on very high so really didn’t do much. I think I left around 1:30pm and arrived around 7:30pm. Somewhere around 5 to 6 hours it took. Once I arrived at KPP I now had to figure out how to get to the Hotel Mel was at. In most cities you just grab a taxi or Tuk Tuk. There were neither in this town apparently so Nexus One + Google Maps to the rescue. I marked where her motel was and started walking. 1/2 hour and a gallon of sweat later I made it.

The hotel was pretty fancy for American standards, but fairly cheap. Regardless I think the bill was on Mel’s work so yay.

The next morning we walked back to the bus terminal and managed to catch a bus to Sukothai which was our intended tourist destination for the weekend. This trip was only an hour and we thought it was going to take two which was suprising. Here we managed to get a taxi/pickup truck thing to our motel/resort. The place we stayed at was Tharaburi which turned out to be super nice. We have had very good luck staying at these little Thai resort places. The staff was amazingly friendly and helpful. They spoke very good English which helps so much. We are working on our Thai, but we just are not to the level that is needed to communicate efficiently. I’m sure there is a website out there that is the opposite of engrish.com that we probably would fit the profile of.

They had bikes that you could rent out front for like 40 Baht and we decided to try them out. It was pretty nice biking around. We biked up to the entrance of the ruins park and then around and back to the resort.

The next morning we walked to the park to see the ruins. I’ll let the pictures tell the majority of the story.

Here is an excerpt of the photo album from our trip. To see the full album go here.

Also note that if you are reading this in Facebook there is a good chance that the images don’t show up. You can check out the original post at http://www.tygertown.us/blog 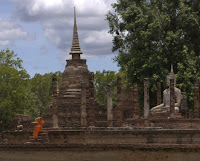 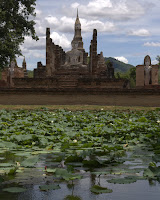 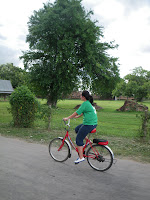 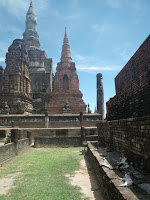 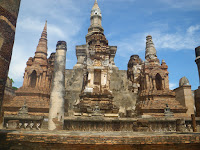 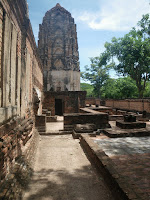 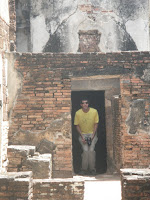 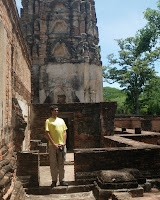 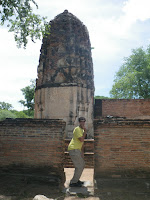 At the end of the day I captured this video so I could show people how crazy hungry fish are here in Thailand. All you have to do is throw food in the water and fish come from everywhere and freak out.

On the way back we learned that not all busses are the same and that paying more for a ticket does not mean you will get a better quality bus. The bus was nice that we got on, but it was defiantly designed for shorter people. I actually could not even sit in the seats properly because I didn’t have enough leg room to even fit my legs in, but it got us home.