Mel and I wake up and head to the nearest metro where we transfer over to the main rail station. Train leaves at 8:40am and we are there at about 7:30am. Always early we are. Grab some snacks from the convenience store and sit at a coffee shop for a while until the platform for our train is announced. Says J2 on the monitor. Alright, lets go…where? A few times up and down the station until we finally figure out how it works. Then hustle down the hallway and up the stairs and there is our train. I really like trains.

We later learn that it is the Super City Pandelino(?). Really really nice train. Goes nice and fast too. There was a display that showed how fast we were going and the fastest I saw was 140 km/h or 87 mph. Nice!

Here is the inside of the first class cabin 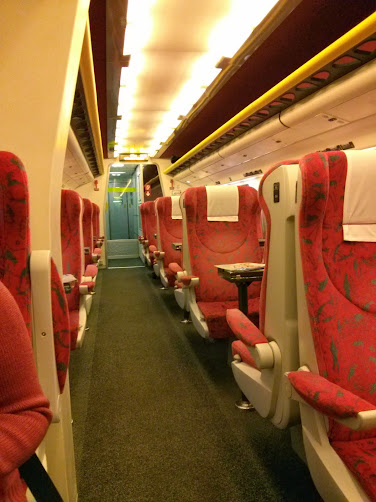 Off we go on the train. Glad I got my snacks because it is about a 3-4 hour journey with one train switch in Cheb(pronounced Heb). Ohh, no actually because we are 1st class we get Champagne, sandwich or salad and some coffee/tea for free! Awesome.

Choo Choo!! More pictures on the camera that will come later. Once in Cheb we offload and wait for the next train which is schedule to arrive in about 10 minutes or so. Shows up on the platform and we load on. This train is a 2 car diesel that looks more commuter ish. Almost like a bus on the tracks..or something. Off to Karlovy-Vary-Dvory. The station we are getting off at is outside of the town a bit as we are trying to get to the Moser glass factory. They have a tour that looked really fun. Train arrives and dumps us off somewhere. Go go gadget Google Maps. Location acquired and off we go.

We get there at about 12:30am and the next tour isn’t until 1:15pm so we tour around the gallery. Some really amazing glasswork. Glasses, wine glasses, decanters…everything involving glass and it is all handmade. Our tour begins and is basically one lap around the 6 or so stations inside the factory where they make different things like glasses and plates or whatever. The tour guide was very nice and told us all about each process. Each station, or whatever you want to call it, has 4 workers. A beginner, an apprentice and the master. The last person just takes the finished product from the master to the cooling station. The way it works is that the beginner heats the glass bulb in the furnace and blows air into the heated glass bulb to make it larger. Then hands it off to the apprentice. The apprentice puts the heated blown up bulb into a mold which shapes the glass into whatever they are making. Then it is handed over to the master who does the very fine engraving or whatever is necessary to finish the product.

Apprentice putting the hot glass into the mold

Apprentice making one of the plates

The tour was very cool to see in person very close up how glass pieces are made. They are expensive and I can see why. The guide said that out of the 15 pieces each station can make per hour, only 6 of them will be good enough quality to sell.

We head back through the gallery and decide not to buy anything as I am in sticker shock still. We are talking at least $50 per single glass and those are about the cheapest you see in the cases. They are very very nice though.

After the factory we decide to find our hotel. Number 2 bus stops just outside the factory and we could have taken that, but decide not to. Google says it is about an hour walk so we hail adventure and on we go.

Somewhere in Karlovy Vary on our walk

So far the town doesn’t really live up to all the excitement that was on Wiki Travel. On we go, still some 37 minutes of walking according to Google and it is cold out. Just across the river and up the hill or something.

It’s getting cold and according to Mel I’m getting cranky which means I’m hungry. Ohh what is this place over here?

When in doubt, just say Dark when at a restaurant here.

It was a very touristy place, but wow did they have some really tasty food and beverage.

After our brief gluttonous adventure with Karel IV we make way to the hotel which just happens to be a 20-30 minute walk up the hill. Probably for the best after that meal. Actually a really nice walk and amazing view over the actual tourist downtown. The hotel is nice and the owner very very nice. A great adventure day for the books. Tomorrow we make the trek back.