Honeymoon — Day 8 — Back to Prague

Our hotel had a free breakfast which was very delightful. Continental style with a choice of boiled egg or scrambled egg as well as the regular assortment of bread, meat, cheese…

Afterwards, we picked a tourist spot from Trip Advisor to go visit. Diana Lookout Tower had really great reviews and looked fun for a lunch spot. We had some time to kill so we shall adventure. First, we must trek down the switchbacks and then across the tourist center area. 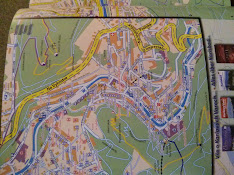 Map of the town

View from just near our hotel

Down down down down with no slipping. If you had super sight you could see just where the mountain straight ahead meets the mountain to the left and behind it the Diana Tower sits. Down below it somewhere is a tram that you can pay to take you up. We trek across the town and find that the tower is closed Jan 13th – Feb 9th. Sad face panda bear. Ok, 2 minutes of moping and deciding if we will just climb the hill instead. We decide that because there is not enough time due to our train arrival we will just head to the train station. Again, if you were to use super sight in the above image and look beyond just above where the trail ends straight ahead, you would see about where we need to go. Yep, we walked a few miles.

But first the quick stop into McDonalds to unlock an achievement.

Get a beer with a cheeseburger at McDonalds unlocked

Cha-Ching! Across the street is the iWant store. Haha.

I actually do not want though

Off to the train station. We get there about an hour early. Hmm, only trains marked with OS stop here and we need to take train R611. Google Maps to the rescue. There is another train station across the river. 20 minutes walking…go! Over the bridge and up and around we go. Turns out we walk around the back side an extra 10 minutes. No worries, we are still 30 minutes early.

Train arrives and we plop on into our first class assigned seats. Only one picture on my phone from the train ride.

Cottages along the river. Or maybe they are houses, I don’t know. I like the idea of cottages better.

Zoom zoom zoom we go. This train is a bit older and we have a room with 6 seats all to ourselves. This train is non-stop to Prague. The train stops in Usti nad Labem where apparently the service crew swap out. I try to go to the bathroom when I am confronted with angry train lady. Dun dun dunnnnn! She speaks no English but gets her point across that I need to go back to the room with angry scowling and pointing with some grunting as well. So I go back into the room and pull out my phone with the ticket on it pulled up and pull out my passport. She comes in all grumpy like and eventually sees that we are indeed in the correct place and then is happy. Somehow I get a smile out of her and then she leaves.

We get into Prague around 4:30pm and head back to the apartment and drop off our goods. Then we head out to the main town center where the astronomical clock is and stuff. Aka, tourist central.

Mel and I head over to George & Dragon, an English pub for noms.

Pretty tasty stuff. After dinner we head to the Absintherie.

Very interesting liquor. The stuff on the left had water drizzled through a sugar cube while the stuff on the right was set on fire for a while with a burned sugar cube on top. This is done to make the alcohol smooth in taste.

I asked if Absinth could be drank without sugar and they said it could, but would not be as smooth so I decided to try it. They just put a cube of ice in it though still or it would be to harsh. We also ordered some ridiculously tasty coffee absinth drink.

It is a good thing this place is just down the road maybe 50 meters from our apartment. Even though we drank about a liter of water along with these drinks, it was straight to bed after this place. Worth the visit though for sure.