Koh or Gaw means Island and Kret or Gret has something to do with a river bend. As this is a sorta man made island on the Chao Prya

The day started off and we could see that it was raining in the city from our apartment. We decided that we wanted to get out regardless.

Our first stop was the restaurant that my friend Lee had showed me. I had a Khao Mun Gai and Mel and I had Chaay Yen(Thai ice coffee is so good!) – 55 baht

We then caught the bus down to the park and took the ferry across the river to the Saphan Taksin pier. – 6 baht

From there we hopped on the Chao Phrya express boat all the way up to the Nontaburi Pier. – 26 baht

The first thing Mel noticed that there were cars on the other side which meant we were not in the right place. Nexus one + Wiki Travel + Google Maps and we realized we were still too far south and had to get up to Pak Kret and take a ferry across there. So back across the river we go – 4 baht

Wiki Travel had said to take the 32 bus up to where we needed to go, and we saw a 32 go by and decided to wait for another. After watching quite a few other buses go by and no more 32’s I decided to consult Google Transit. No more 32’s for another 40 minutes! Ok, taxi it is. He did a pretty good job and didn’t mess around too much and we got there. – 105 baht

Ferry across the river – 4 baht 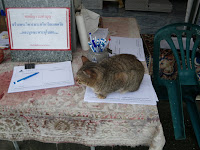 The island is pretty much just a road that goes all the way around the outskirts of the island. Near the pier there shops on both sides of the road. Since the Island is famous for the red clay pottery there was a bunch of it for pretty cheap. Somewhere along the line we got another Chaay Yen and a Coffee Yen + some fried fish clumps – 65 baht

Across the river was a huge Buddha statue. Mel said it might be the one that is the largest that is made of pure gold. It looked pretty cool. 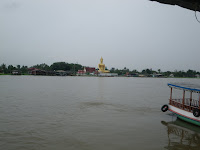 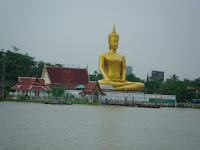 Eventually the shops ended and we were in the middle of a residential area where we decided to turn around and go back. Soon after we ran across the pottery factory where we bought a small oil burner thingy and I took a video of a guy making on e of the pots – 125 baht

We then decided to see if there was anything on the other side of the island(take a left after getting off the pier instead of a right). Apparently, Sunday’s are the big day when people go to the island, so nothing was open on that side except a small restaurant where we had lunch – 180 baht

We then took the ferry back across the river – 4 baht

Map for the day