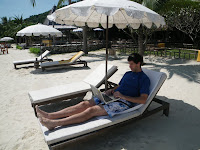 We arrived yesterday after about a 5 hour journey in total. We left the apartment around 9am and took the BTS down to Ekkamai. The southern bus terminal is there where we caught a bus on the Cherd Chai tours that took about 3.25 hours to get to the Phe pier near Rayong.

There we waited for the boat from our resort to come pick us up. We arrived on island around 5pm and rented a motor scooter to go see our friends that happened to be on the island as well. They were in Ao Pai(Ao means bay in Thai) which was about 3km away. We had dinner with them and walked down the beach and saw some fire pole shows which were interesting.

Today we woke up around 9am and came down to have breakfast. The resort gives free breakfast from 7:30 – 10, which is very cool. The weather was beautiful. Blue skys and turquoise water. 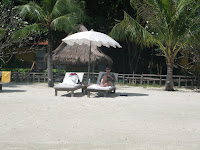 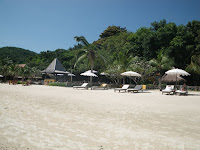 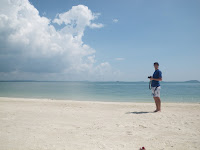 I decided it was time to dig in the sand. We had lugged a small popcorn bucket from the movies all the way to the island for this pupose.

I decided to try and build a tower. Apparently I fail at structural engineering as the last bucket of sand was too much and collapsed the whole thing. 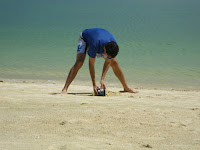 Here are some more pictures of the beach

The resort we are at is called Moobay Talay. The rooms are bungalow style and are very clean and neat. The shower is a private outdoor shower, which is actually very cool.