After our trip in Luang Prabang we were slated to head to Sapa. Mel and I have never been to Hanoi so were not sure if the plan I had made to hop off the airplane and get a taxi directly to the train station to catch our train would work or not. The plane was supposed to arrive around 6:10pm and the train was to leave at 9pm ish. I suspected that to be plenty of time.

We hopped off the plane and headed to immigration. We had our Visa On Arrival forms filled out already, although, Mel didn’t have a picture to put on her application. I had read that it really didn’t matter and you would pay a 2-3 dollar “fee” aka bribe to fix that. So We waddled through the line to hand in our application and passports.

Immigration Officer: “You no have picture?!?”

Hands back the application form and points to pickup window area

We were a bit bewildered as she didn’t indicate if she was going to still allow Mel’s application or was pointing to the area where Mel would now spend the next 5 days sitting and waiting for our flight out of Hanoi.

A bit later the lady brings over our passports, both with VISA’s in them and  tells mel, “I fix for you. Take picture for $2.” She comes out of the booth with a point and shoot camera snaps a picture and goes back into the office and tosses the camera off to the side where it will not be touched again until this happens again. We give her the VISA fees and the extra $2 which I watch her put into the “I’m taking this home with me tonight because bribes are awesome” pile. She hands us both our passports and off we go. That one made us a bit nervous, but hey it worked. Gotta love SE Asia Bribes.

Through immigration and off to pull out millions and millions of dong. The current exchange rate is about 20,800 to the dollar. Nothing like a 10″ thick wallet since the bills go from 500,000 all the way down to 1000…anywho…taxi to the train station.

This nice vietnamese gentlemen comes up and asks if we need a Taxi. In pretty good English. FLAG! ERROR! ADVISE CAUTION AHEAD!

While yes we do. Let me just call my friend over….How much?

Now, to find that train…We hunt around and ask about 5 different people until we find the desk and get our tickets and head onto the train.

YES! Finally pictures and less words for my beloved readers 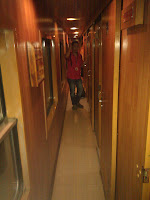 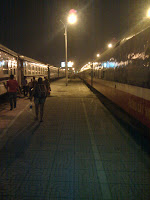 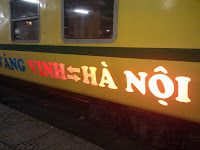 So off the train heads. We are in a cabin of 4 beds. 2 bunks. Mel and I have the left side and a very nice lady from Canada on the other side. She is a talkative one and Mel and her have a great convo. I decide to peace out and try some Zzzzs. The cabin has A/C and I cover up. That is until about 2am. Apparently the A/C has been shut off and now our room is quite literally a sauna.

FYI, our carriage was part Fansipan or Fanxipan. I recommend trying another one of the many companies in the summer to avoid this wonderful sweat lodge.

Bla bla bla, complaining. Arrive in Lao Cai station. Now we need to get a bus to Sapa. Can’t even get off the train without touts getting in our faces about taxis and busses for ridiculous prices. I’m thinking about yelling “Mai Ow!” but of course they would not understand that. We keep walking as they hover around us like hungry mosquitos. We exit the station to amazingly see Mel’s name on a sign somebody is holding up. BINGO! Did not even know that was going to happen. Apparently our guest house has arranged this for us. +1 for them.

The bus ride is stunning as we ascend to Sapa and can see all the terraced rice patties in the mountains. Arriving in Sapa we are greeted by some local tribe women who follow us everywhere. We check in and do some thinking. Only today and tomorrow we will be here. Yep, a trekking tour it is. Now!

So out the door we go. Tribe women still hanging about and following us. Ohh, they are going with us on the tour…ok. Here take this bracelet as they put it on. You buy something later from us. Umm, ok. +2 bracelets for me and Mel.

Haha, ohh this was awesome. Late into our trek we are walking along and come across this flock? of ducks waddling down the hill. So funny, they were just so content and walked right down the path onto our path and up the hill. Turned the corner and right into their pen. Apparently it was just bath time and now they went home for nap time. 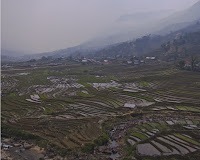 So the trek ended up being about 12km or so long. Mel ended up with some pretty terrible blisters from her shoes that she powered through near the end of the trip. I could tell she was hurting. It was almost carry her time.

That night we ate down on the local “pub” like street and headed back to the motel. The next day we didn’t do too much. Just ate lunch and had some coffee. Played some cards until it was time to catch the bus back to Lao Cai for the Train to Hanoi.

The train ride back was a repeat of the train trip up. Sauna + little sleep.

All-in-all, we probably should have spent 2 or 3 days in Sapa as it was the place we really were hoping Luang Prabang would be. Cool temperature. Cafe’s everywhere. Relaxed atmosphere. Hindsight is 20/20.