Our last day of our Honeymoon. We have already seen pretty much everything that we had hoped to see. With no real plan we set out to find a good breakfast place. A quick search on Google Maps and we were on our way to Café Amandine which was just a bit of a walk + tram away.

Cappuccino and something else delicious

After breakfast we were not really sure what we wanted to do other than get our Love Locks put on the bridge. We decided that we would take a bit of a tram adventure south a bit and then over the river and back up. Then we could put our lock on the bridge and do the ceremonial key toss and then head back and figure out what to do after. Well, turns out we forgot the lock in the room so instead just headed back to our room to get it in stead of the tram adventure. I like trains and the tram is like a train-bus.

Well, we got to go 2 stops at least on the tram-bus. Good enough for me. Ok, back to our apartment and grab the lock and head out. Mel wanted to get a necklace for her sister for her wedding so we popped into a jewelry store that looked reputable. Some really pretty stuff in there. There was a heart necklace that I thought would look really nice on Mel there. We found a necklace that we thought would look really nice on her sister. It’s just a plastic card that they swipe right? Not like it means anything when they swipe it.

Ya, ok now back to the apartment to drop off her sister’s necklace so we are not carrying that around to be stolen. Then back out to get that lock on the bridge. Ohh, look a Moser store. I tell Mel that I’m sorry we didn’t buy something at the Moser store attached to the actual Moser factory(see this post about that). We head in to the store looking for some Champagne flutes for her Sister’s wedding as a gift. We found some really nice ones and purchased them, but had to get ourselves something fun too.

Why would we get only 2 tumblers and have them red and black. Well…the black one was 2000k and the red one was 2200k. How much is that? I’ll post a link to the Google exchange for you instead of putting the number here. We know for a fact that these are hand made out of the best whatever it is they make the glass out of. The whole idea of a honeymoon is to do whatever you want right?

Now, back to the apartment again to drop off our boxes of loot. We are going to the damn bridge now! Haha. 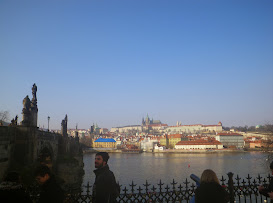 View from just off to the left of the bridge. 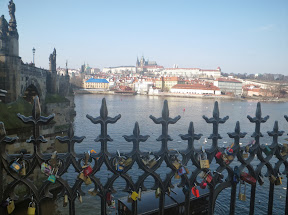 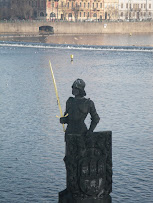 I think he guards the bridge 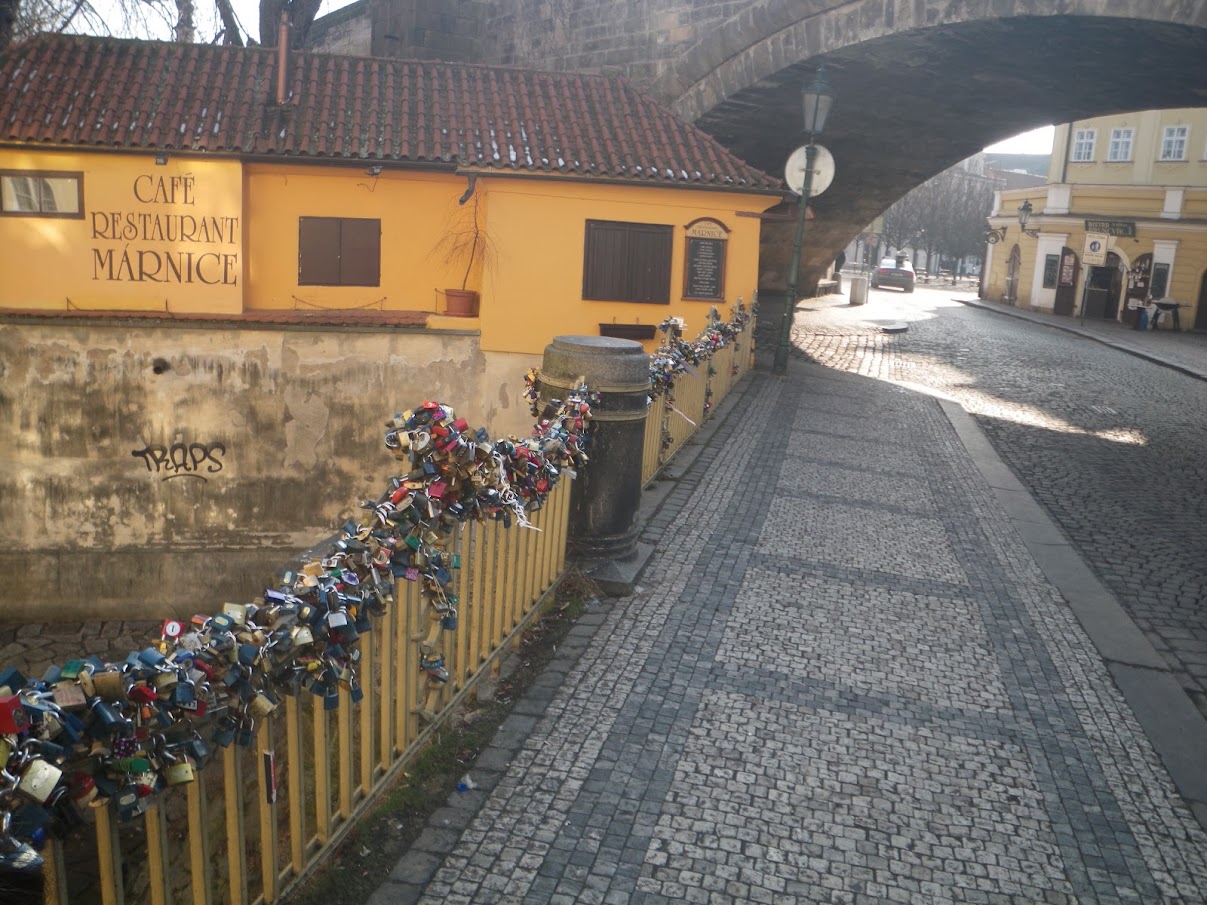 Another location with love locks 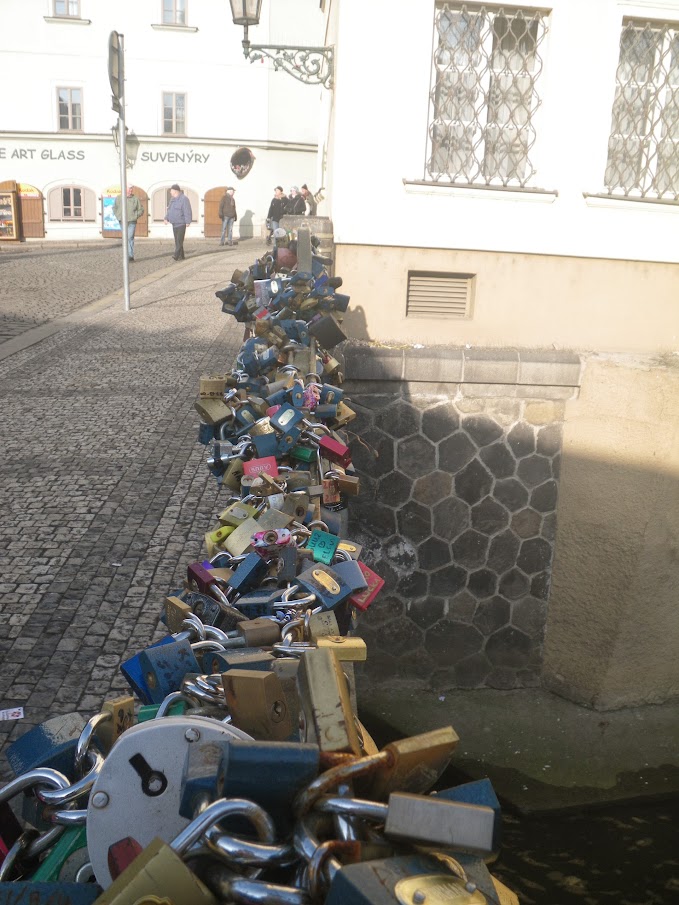 And the other direction 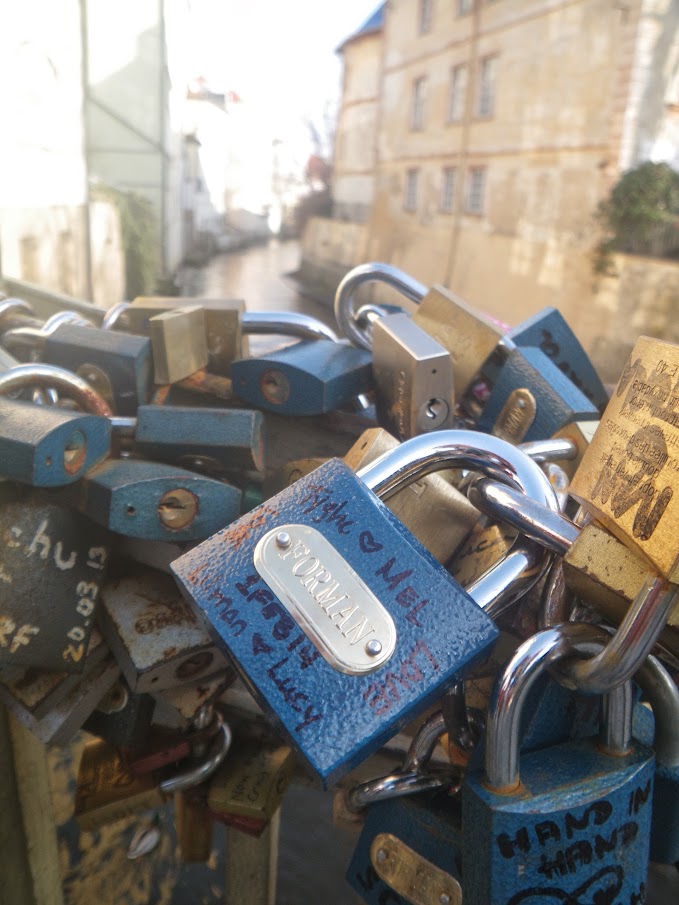 The final resting place of our love lock

So a little prelude to the video of Mel throwing the key into the river. There are tour boats like this one 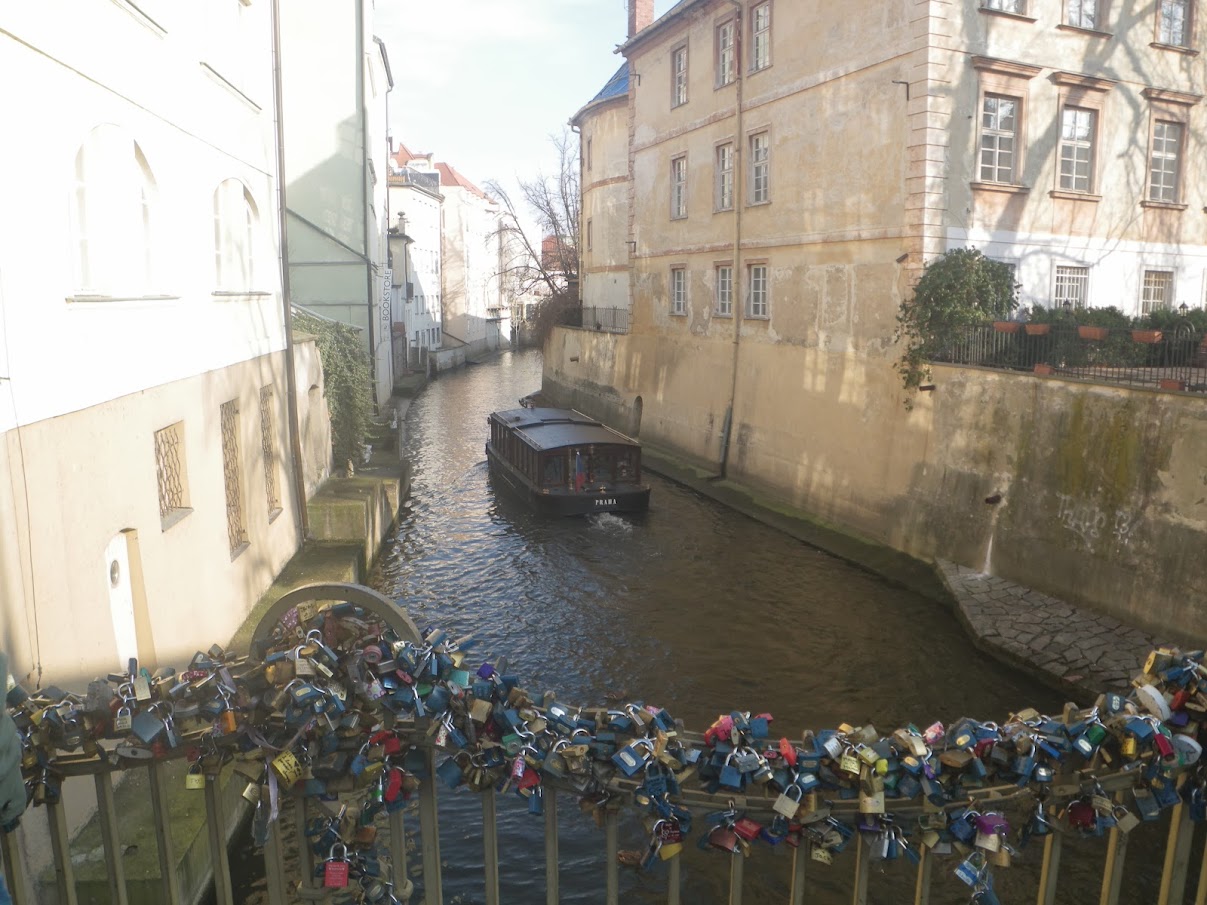 Tour boat that goes down the canal

Yep, right on top of one of the boats. We can just hope that the key made its way into the water. Otherwise it is just riding up and down the canal every day or somebody found it and threw it into the garbage. Haha…it makes it even more special really..not throwing it into the garbage, but the whole accidental throwing-on-top-of-the-boat thing..you know what I mean. Alright, back across the bridge and time to find some mid afternoon noms before 5pm nap time. 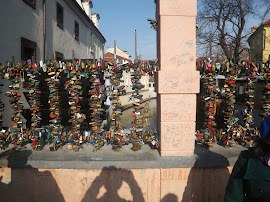 More locks! They are everywhere. 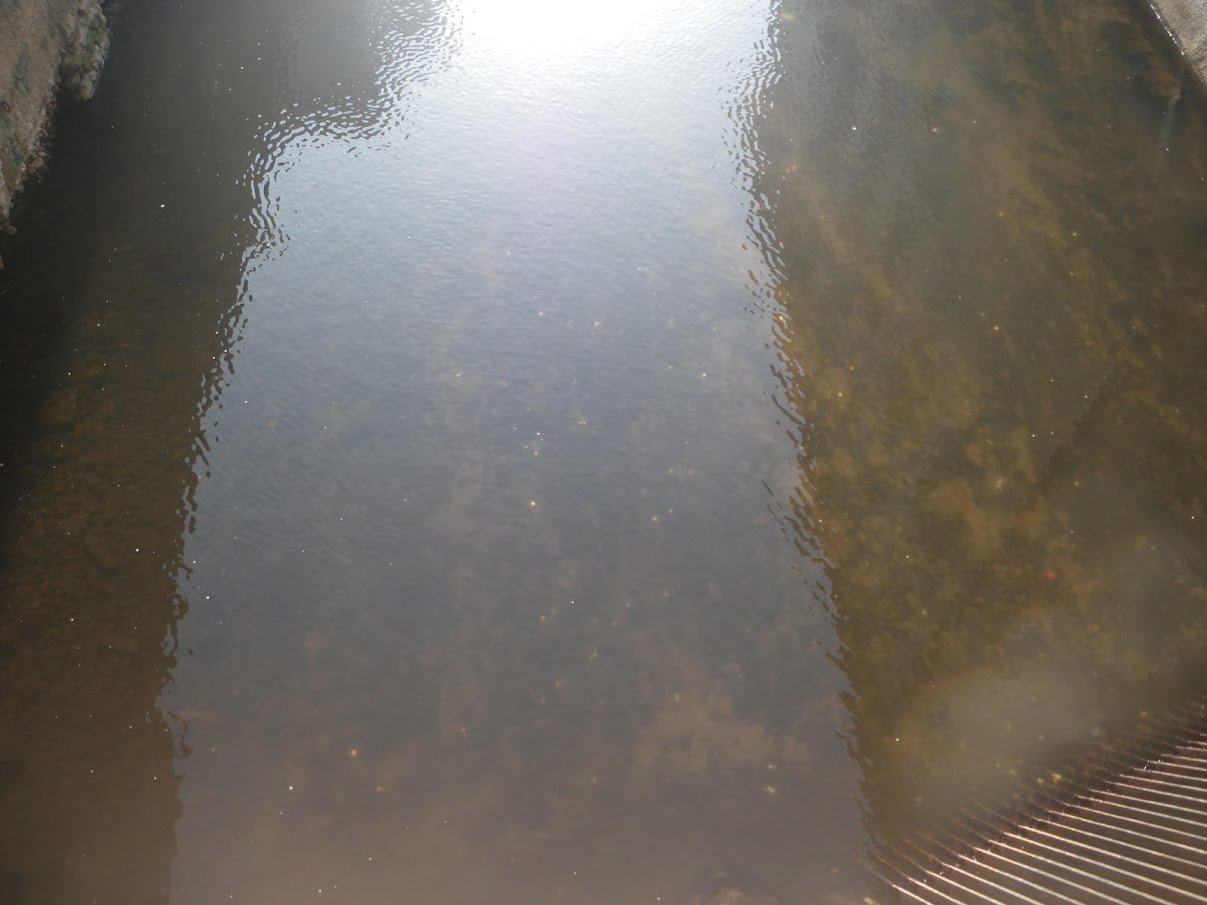 Keys in the canal 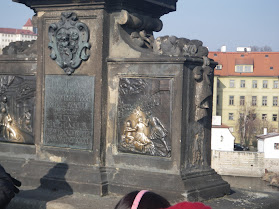 I think good luck comes to those who touch it or something. The bronze or whatever is rubbed off. 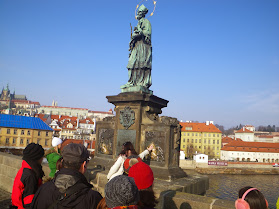 I put these things on the same level as spam emails that say forward to 7 people or bad luck will find you. So I didn’t touch the statue. Now, feed me food or I will get grumpy. 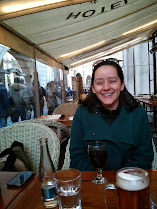 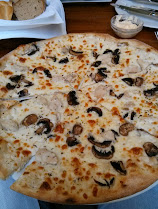 This was a very tasty pizza. NOM! 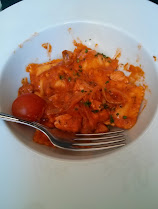 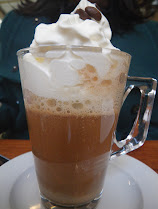 Not an Irish Coffee, but some other tasty liquor coffee for my sweetie

Now, back to the apartment for Mel’s 5pm nap time and Tyghe’s 5pm blog time. 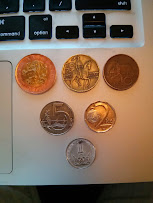 All the different Czech coins

Alright, rested and blogged. Out we go. Originally we were going to go back to the Cognac place for our final night, but then we got lazy and went back to the brewery to have another sip of the great nectar. 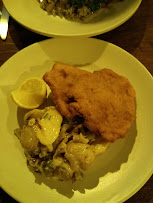 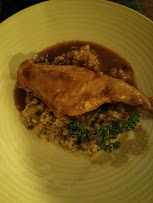 Back to the apartment after dinner again to do some packing to ensure we don’t need another bag or something to get everything back. I again succeed in being an awesome packer and we have extra space with our existing bags. Tomorrow we plan on breakfast near by and then off to the airport for our flight home.