Finally am getting around to writing this a week after we arrived back in Bangkok from our trip. Only scammed one time on the way to Siem Reap. Feel alright about that, but really was shooting for not getting scammed at all. Many pictures were taken. It was hot. It is hard to climb up all the temples when it is hot.

Instead of blasting all of the pictures we took onto my blog I’ll just pick out a few of them and then put the link to the Picasa album’s so you can view the rest if you wish.

Getting to Siem Reap seemed like quite the daunting task after reading about it online.

Take a bus or train to somewhere. Take a tuk tuk to the border. He will try to take you to a fake Cambodian Consulate. Tell him you already have a VISA. Then tell the next fake person he takes you to the same thing. Then he will take you to the border. Go through Thai immigrations. Then do your entry VISA on the Cambodia side. Don’t pay the express fee as it is a scam. Take the mini free bus to somewhere. Then take a taxi or other bus to Siem Reap. If the taxi tries to tell you he cannot enter the city he is lying. Just tell him he can and then he will take you to your guesthouse.

That is just about the gist of it. Well we for the most part did everything except when our taxi took us to some random place and said that a tuk tuk would take us to our guesthouse from here for free, we didn’t argue with him. I tried but he said the tuk tuk was free so whatever…except the tuk tuk is not free. He lied. Liar. Big ol’liar-face.

After dealing with that we finally made our way to our Guest House. http://www.siemreaprooms.com/. Let me just take a moment to say how awesome this place is. The owners are fantastic. They know the area so well and will set you up with drivers that you can trust and that are very very nice. We used the same driver 2 days because he was so nice. They will make reservations for you at places…anything. Good breakfast sandwiches as well! Trip Advisor Page.

The first night we met up with a friend for dinner and a walk through the market. It was her last night in Siem Reap and the last time we would see her in SE Asia. Had a fun time at the market and tried a new drink called the Tomb Raider Cocktail which is basically a gin and tonic with a more citrus taste. Good stuff.

I won’t name any of the places where we went because I don’t know where we went. Just the stories I have of our adventure.

Steps I climbed to take pictures for your enjoyment.

This picture took about 15 minutes to take because I had to keep going back and adjusting the zoom/focus and not running fast enough. I have quite a few pictures of my butt as I was walking down the hallway to get next to Mel.

Lookie what was hiding and waiting for me.

Too tired to go to this temple. 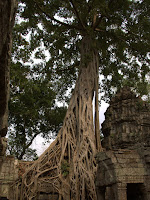 All the people waiting for sunset. YAWN! Sunset never happened. Instead a rainstorm moved in.

Ya, I don’t remember the actual name.

Not in this picture, but you can see that this river floods quite a bit and so they adjusted their housing style to compensate.

But, Tyghe, I see only 2 days worth of touring and you were there for 3 days?

That is right. So we played lazy on the last day and did some tootling around Siem Reap itself. We are boring!!